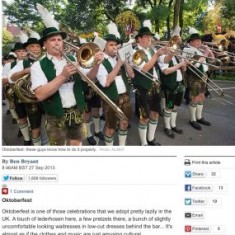 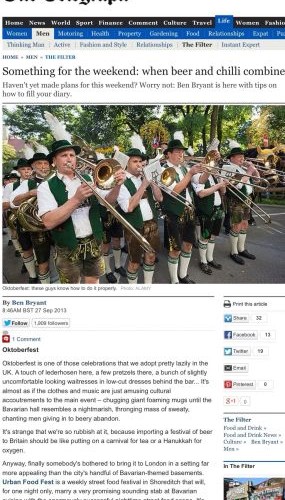 Listed the Urban Food Fest’s Oktoberfest Special as the No.1 Top Thing To Do in the Something For The Weekend section:

Oktoberfest is one of those celebrations that we adopt pretty lazily in the UK. A touch of lederhosen here, a few pretzels there, a bunch of slightly uncomfortable looking waitresses in low-cut dresses behind the bar… It’s almost as if the clothes and music are just amusing cultural accoutrements to the main event – chugging giant foaming mugs until the Bavarian hall resembles a nightmarish, thronging mass of sweaty, chanting men giving in to beery abandon.

It’s strange that we’re so rubbish at it, because importing a festival of beer to Britain should be like putting on a carnival for tea or a Hanukkah for oxygen.

Anyway, finally somebody’s bothered to bring it to London in a setting far more appealing than the city’s handful of Bavarian-themed basements. Urban Food Fest is a weekly street food festival in Shoreditch that will, for one night only, marry a very promising sounding stab at Bavarian cuisine with the enormously successful nighttime street food scene. It’s founder promises cheap drinks and gourmet food, with specialities including schnitzels, schweinebraten (roast pulled pork), chicken knodel (dumplings) and red cabbage, bratwurst (German grilled sausages) and sauerkraut, reiberdatschi (potato) and Bavarian apple strudel with compote. And of course lots of beer.