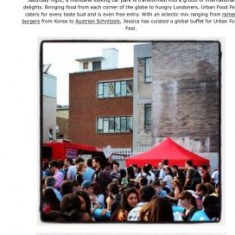 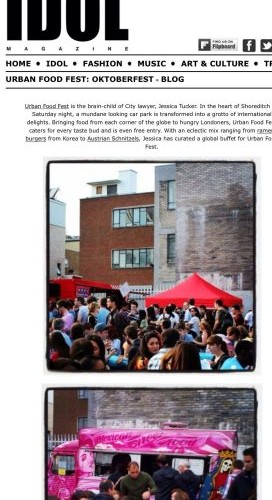 In the heart of Shoreditch on Saturday night, a mundane looking car park is transformed into a grotto of international delights. Bringing food from each corner of the globe to hungry Londoners, Urban Food Fest caters for every taste bud and is even free entry. With an eclectic mix ranging from ramen burgers from Korea to Austrian Schnitzels, the Urban Food Fest founder has curated a global buffet for Urban Food Fest.

Alongside these culinary adventures there is also live music, including bands, djs and solo acts, which creates a fun and buzzy atmosphere. Urban Food Fest founder says of the project “I wanted to create an event that enabled Londoners to try the world’s best street food, whilst drinking incredible drinks and having a great night out.” With the classic combination of fine food, drink and music, it would be hard for it not be a great night out.

She has recently given an Oktoberfest theme to the Urban Food Fest. Bavarian specialities including German Beer, bratwurst and pretzels were on offer as well as traditional Oktoberfest music and lederhosen to boot.

If you do make it down be sure to try Bunnychow, South Africa’s answer to a kebab, fish dogs , a hybrid of fish and chips and a hotdog, served with tartre sauce and mushy peas, every flavour of brownie imaginable, including salted caramel, a personal favourite. With each vendor having a quality product as well fascinating back story and international origin, the Urban Food Fest will leave you wanting to come back to try more.