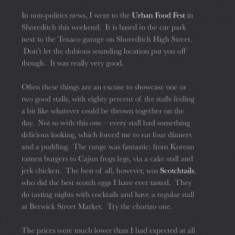 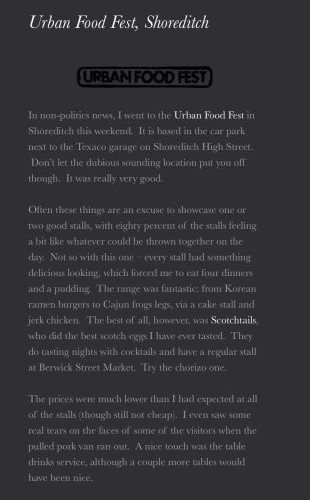 In non-politics news, I went to the Urban Food Fest in Shoreditch this weekend. It is based in the car park next to the Texaco garage on Shoreditch High Street. Don’t let the dubious sounding location put you off though. It was really very good.

Often these things are an excuse to showcase one or two good stalls, with eighty percent of the stalls feeling a bit like whatever could be thrown together on the day. Not so with this one – every stall had something delicious looking, which forced me to eat four dinners and a pudding. The range was fantastic: from Korean ramen burgers to Cajun frogs legs, via a cake stall and jerk chicken. The best of all, however, were the scotch eggs, some of the best I have ever tasted.

The prices were much lower than I had expected at all of the stalls. I even saw some real tears on the faces of some of the visitors when the pulled pork van ran out. A nice touch was the table drinks service.

All in all, well worth a visit!