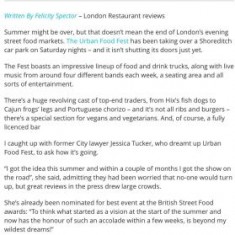 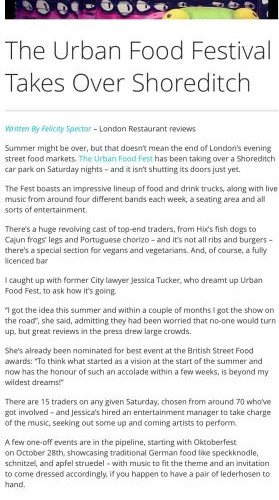 Summer might be over, but that doesn’t mean the end of London’s evening street food markets. The Urban Food Fest has been taking over a Shoreditch car park on Saturday nights – and it isn’t shutting its doors just yet.  The Fest boasts an impressive line-up of food and drink trucks, along with live music from around four different bands each week, a seating area and all sorts of entertainment. There’s a huge revolving cast of top-end, including fish dogs to Cajun frogs’ legs and Portuguese chorizo – and it’s not all ribs and burgers – there’s a special section for vegans and vegetarians. And, of course, a fully licenced bar.

The founder of Urban Food Fest has already been nominated for best event at the British Street Food awards: “To think what started as a vision at the start of the summer and now has the honour of such an accolade within a few weeks, is beyond my wildest dreams!”

A few one-off events are in the pipeline, starting with Oktoberfest on October 28th, showcasing traditional German food like speckknodle, schnitzel, and apfel strudel – with music to fit the theme and an invitation to come dressed accordingly, if you happen to have a pair of lederhosen to hand. Urban Food Fest founder says: “It’s working out great! The Fest has flowed from the start, the feedback has been immense and there are lots of other exciting plans for the future too.”

Hurry, while stocks last! Go now, or miss out! It’s not hard to work out why pop-up events have an enduring appeal. The founder of a weekly street food market in East London, agrees: “Knowing its for a limited time only makes it all the more special. It’s partly because people get bored of the same restaurants and bars, which they’ve frequented a hundred times and want a night out that is fun and very good value.”

Her Urban Food Fest sets up shop in a Shoreditch carpark, turning this unlikely venue into a gourmet night market with food from around the world. “I want each Saturday night to be special and unique”, she says, “so I change the line up of trucks and stalls each week, and have different drinks and cocktails at the bar.” Some weeks, there’s a special theme – ranging from Red Hot Chilli Peppers to Oktoberfest and, coming soon, a run of Christmas markets.”

On those nights, she says “all the stalls serve themed dishes and the venue is decorated to match, so for the Japanese Harajuku Girls & Korean Gangnam Boys night, we had a giant inflatable sumo costume, girls dressed as Manga cartoons and our Korean chefs provided entertainment by doing a dance to “Gangnam Style”.

She is constantly on the search for new vendors and ideas, sourcing and testing dishes from food trucks she’s managed to track down around the country. All this, as well as her full time job –  “I think running any business is long hours, working until midnight most days and dedication – but I absolutely love it!”