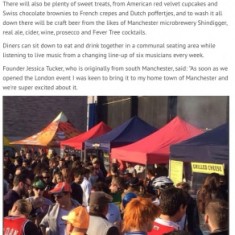 Manchester will welcome next weekend, the launch of Urban Food Fest. The night market has been going strong in the London hipster district of Shoreditch since 2013 and is now branching out up north, taking over a car park off Deansgate every Saturday from February 28.

The pop-up event will feature 15 different local traders every week, serving gourmet street food from all over the world: from British pulled pork sliders to Venezuelan arepas, Italian wood-fired pizza, Mexican burritos, Spanish paella, Peruvian choripan and Greek souvlaki. There will also be plenty of sweet treats, from American red velvet cupcakes and Swiss chocolate brownies to French crepes and Dutch poffertjes, and to wash it all down there will be craft beer from the likes of Manchester microbrewery Shindigger, real ale, cider, wine, prosecco and Fever Tree cocktails.

Diners can sit down to eat and drink together in a communal seating area while listening to live music from a changing line-up of six musicians every week. Founder Jessica Tucker, who is originally from south Manchester, said: “As soon as we opened the London event I was keen to bring it to my home town of Manchester and we’re super excited about it. “We’re trying to keep it as local as possible, we want it to be really Manchester-focused with an emphasis on locally-produced, gourmet food. “The stalls will change every single week so there will always be a different line-up of producers with different dishes to try. “It’s been a huge hit in Shoreditch, with first class national and international press coverage. We get visitors from around the world and this will be the hottest event in Manchester.”

Urban Food Fest will be held at the Euro Car Parks at 2-6 Bridgewater Street, Deansgate, M3 4LY, from 5pm to midnight. Entry is free.

The street food festival celebrates all things end-of-the-20th-century as it continues its residency in Manchester city centre.

Manchester’s latest foodie festival is going back in time with a special retro event this Saturday night.

The Urban Food Fest street food has been going strong in the London hipster district of Shoreditch since 2013 and is now branching out up north,taking over a car park off Deansgate every Saturday.

This weekend from 5pm, the event’s trucks & stalls will be serving up a delightfully retro feast including:

All that can be enjoyed in communal seating areas, accompanied by 90s tunes from live musicians and servers dressed in themed costumes.

And if you really want to get into the spirit, there will be a free craft beer or cocktail for everyone in 90s-themed fancy dress!