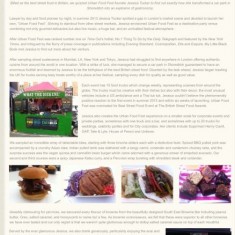 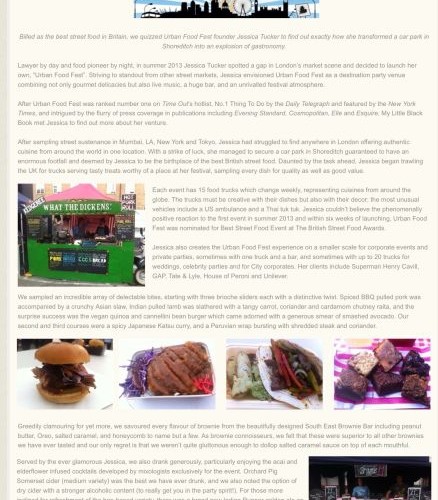 Billed as the best street food in Britain, we quizzed Urban Food Fest founder Jessica Tucker to find out exactly how she transformed a car park in Shoreditch into an explosion of gastronomy.

Lawyer by day and food pioneer by night, in summer 2013 Jessica Tucker spotted a gap in London’s market scene and decided to launch her own, “Urban Food Fest”. Striving to standout from other street markets, Jessica envisioned Urban Food Fest as a destination party venue combining not only gourmet delicacies but also live music, a huge bar, and an unrivalled festival atmosphere.

After Urban Food Fest was ranked number one on Time Out’s hotlist, No.1 Thing To Do by the Daily Telegraph and featured by the New York Times, and intrigued by the flurry of press coverage in publications including Evening Standard, Cosmopolitan, Elle and Esquire, My Little Black Book met Jessica to find out more about her venture.

After sampling street sustenance in Mumbai, LA, New York and Tokyo, Jessica had struggled to find anywhere in London offering authentic cuisine from around the world in one location. With a strike of luck, she managed to secure a car park in Shoreditch guaranteed to have an enormous footfall and deemed by Jessica to be the birthplace of the best British street food. Daunted by the task ahead, Jessica began trawling the UK for trucks serving tasty treats worthy of a place at her festival, sampling every dish for quality as well as good value.

Each event has 15 food trucks which change weekly, representing cuisines from around the globe. The trucks must be creative with their dishes but also with their decor; the most unusual vehicles include a US ambulance and a Thai tuk tuk. Jessica couldn’t believe the phenomenally positive reaction to the first event in summer 2013 and within six weeks of launching, Urban Food Fest was nominated for Best Street Food Event at The British Street Food Awards.

Jessica also creates the Urban Food Fest experience on a smaller scale for corporate events and private parties, sometimes with one truck and a bar, and sometimes with up to 20 trucks for weddings, celebrity parties and for City corporates. Her clients include Superman Henry Cavill, GAP, Tate & Lyle, House of Peroni and Unilever.

We sampled an incredible array of delectable bites, starting with three brioche sliders each with a distinctive twist. Spiced BBQ pulled pork was accompanied by a crunchy Asian slaw, Indian pulled lamb was slathered with a tangy carrot, coriander and cardamom chutney raita, and the surprise success was the vegan quinoa and cannellini bean burger which came adorned with a generous smear of smashed avocado. Our second and third courses were a spicy Japanese Katsu curry, and a Peruvian wrap bursting with shredded steak and coriander.

Jessica’s advice to others with a business idea is to plan carefully, know your limitations and perhaps, most importantly, invest time and resources in publicity for your launch. When we asked about the future of Urban Food Fest, Jessica’s excitement was palpable and she spoke of plans for an even bigger and better street food extravaganza in other cities in the UK, and maybe even worldwide. Propelled by the staggering success of Urban Food Fest in Shoreditch, it seems that Jessica’s gastronomic empire is only just beginning.